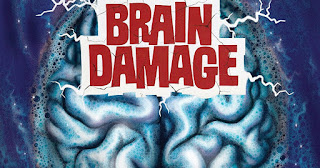 “Brain Damage” (1987)
“Hey, Brian. Why don’t we go out and get us some girls? Hookers-I could eat a million of ‘em tonight! Ha ha!” –Aylmer, “Brain Damage”
Are you a fan of the surreal, visceral body terror of David Cronenberg (“Videodrome”, “Scanners”), the self-aware horror-comedy of Larry Cohen (“Q : The Winged Serpent”, “The Stuff”), AND the over-the-top gore of Herschell Gordon Lewis (“Blood Feast”, “Two Thousand Maniacs”)? Yes? You’re in luck! Let me introduce you to splattermeister Frank Henenlotter’s bizarre cult classic “Brain Damage”! And “Brain Damage” isn’t a dumb, unmotivated bloodbath by any stretch. There is a real social statement underlying it. In fact, “Brain Damage” has, perhaps, the strongest anti-drug message of any horror movie, without coming off as overly preachy or contrived.
Writer/director Frank Henenlotter (creator of the “Basket Case” series, “Frankenhooker”) is known for films brimming with blood, freaky makeup effects, far-out plots, memorable visuals, and twisted comedic overtones. “Brain Damage” is no 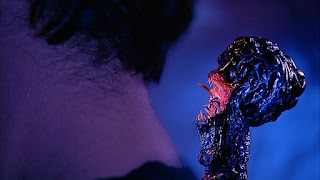 exception. Brian (played by Rick Herbst, who’d later change his name to Rick Hearst and became a popular soap opera actor) meets a phallic, wormlike creature named Aylmer (voiced by TV horror host Zacherley) who promises him a whole new life: a life filled with colors, music and euphoria. All Brian has to do is place Aylmer on the back of his neck, and Aylmer, using a stinger-like quill, injects Brian with a “juice” that gives him an intense psychedelic high. Whoa, far out, man!

Brian immediately becomes hooked on Aylmer’s juice, really grooving on the Mardi Gras of lights and colors that fill his mind when he’s under the influence. However, like any other heavy drug, there are immediate repercussions to this: Brian neglects his job, and completely ignores his brother/roommate and his girlfriend in favor of Aylmer’s sweet hallucinogenic juice. In addition, Brian, while high as a kite and unaware of the world around him, becomes an unwitting accessory to Aylmer’s murderous appetites. You see, Aylmer eats only brains. Human brains, to be specific. Yeah, you don’t need to be psychic to know this is gonna get messy…

When Brian eventually discovers what Aylmer’s been up to (sucking out the brains of random NYC residents while Brian’s been high off his ass, acting as an under-the-influence accomplice) he resolves to quit “using” Aylmer. However, without Aylmer’s juice, Brian gets horribly ill, going through withdrawal symptoms similar to those of an opioid addict; He vomits profusely, writhes on the floor in agony, and has disturbing nightmares and hallucinations, one of which is so over-the-top it had to be chopped in the R rated theatrical cut of the movie.
Tragically, even though Brian has intense guilt over what Aylmer’s been doing, the pain of his addiction outweighs it. Brian literally comes crawling back to Aylmer, and basically agrees to be his partner in crime in exchange for getting juiced again. 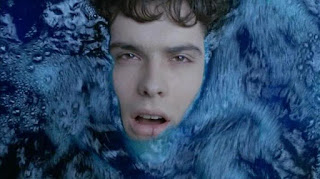 Of course, this is a textbook downward spiral for a drug addict. Brian is now compromising his values and morals to have his drug, which he needs now not to feel high, but rather, from feeling completely awful. Brian’s nightmare with Aylmer only gets worse, and worse, building to a crazy climax that will blow your mind!
“Brain Damage” is my personal favorite of Frank Henenlotter’s films; it’s surreal, funny, and oddly effective, in spite of its kooky premise. I think the main reason it works so well is the acting is terrific. Even though there are laughs sprinkled throughout, everything is played completely straight by the performers. This brings genuine pathos to the movie, and makes you feel for Brian and the other characters. This is different from Henenlotter’s more overtly goofy efforts, like “Frankenhooker” or the “Basket Case” sequels, where the over-the-top humor allows the audience to distance themselves from the characters and their experiences.

Also, the film, although low budget, is technically very well done. The rich, colorful cinematography, offbeat set design, synthesized music score, and Gabe Bartalos’ special makeup effects are all above reproach. And at the helm is Frank Henenlotter, writing and directing this crazy flick with his customary care and affection for the horror genre.
So, if you like weirdo splatter flicks with a twisted dark comic streak, AND you want to see a fascinating film exploring the horrors of drug addiction that’s far more entertaining than “Requiem for a Dream”, get a load of “Brain Damage”! Purchase Brain Damage on Blu-Ray HERE. Enjoy this review? Find more content HERE! 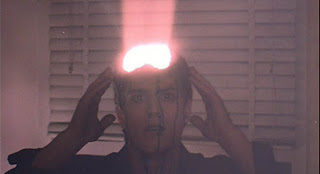