“You Scream. You Expand. YOU EXPLODE.” –“Spasms” poster tagline
“Spasms” is a Canadian import, featuring such acting heavyweights as Peter Fonda and Oliver Reed. But don’t expect Shakespeare here, folks. This is a giant snake movie, with everything but the kitchen sink thrown into it, including crazy makeup and pyrotechnic effects, a creepy cult, the supernatural, 80’s shower nudity, and a special theme by Tangerine Dream. Here we go… *takes huge deep breath*… 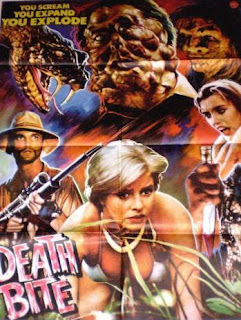 Adapted from a horror novel called “Death Bite”, about a deadly 19-foot taipan snake, “Spasms” decided to spice things up by also making its gargantuan, venomous serpent a literal demon from Hell(!). As the film opens, we see a tribe of Micronesian natives performing a ritual to summon the Great Serpent. Apparently, it works! The creature appears out of a massive fireball, chews up a buncha people, and tosses them around like rag dolls before getting netted by a gang of hunters, who have been enlisted by filthy rich industrialist Jason Kincaid to capture the “one-of-a-kind” snake. See, on a hunting trip a while back, Jason and his brother were attacked by The Great Serpent. Though his brother was killed, Jason survived. Now, for some reason, he has a psychic link with the snake, and can see what the snake sees in bizarre flashes {?!}. Determined to get answers, Kincaid (played with the usual amount of ham by Oliver Reed) hires psychologist Dr. Brazilian (played capably by Henry Fonda), who specializes in ESP, to research the strange mind connection between him and The Great Serpent. Stop laughing, I’m being serious. 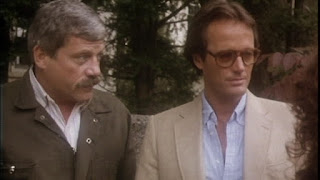 But wait, there’s treachery afoot! Meanwhile, a schlubby, sleazeballing grifter named Crowley enters the scene. He’s out to intercept the shipment of The Great Serpent to the states, and hand it over to a sinister cult (!?!), whose leader looks like what would happen if Donald Pleasence and Anton LaVey had a baby. They want to possess The Great Serpent for worship. Basically, Crowley is to “Spasms” what Dennis Nedry is to “Jurassic Park”; They’re both chubby, bumbling, two-timing crooks who bite off WAAAY more than they can chew when they try to rip off reptilian monsters.
Long, complicated story short: several gruesome deaths later, the demon snake is shipped onto the campus of an American university. It doesn’t take long before the Great Serpent is (shocker!) accidentally released, and viciously attacks students and faculty along its way to a final showdown with Jason Kincaid.
I have to say, I enjoyed this movie. “Spasms”, while modestly cast and well shot, it is not exactly "A" grade, and I definitely have some issues with it. For example, the weird snake cult subplot, disappointingly, kind of peters out towards the end. Also, the finale is too abrupt for my liking, but I’m willing to forgive that.

There are a few elements that set “Spasms” apart, and make it a fun, worthwhile watch. One is the approach they used in showing the monster. Clearly having learned from “Jaws”, the makers of “Spasms” don’t just shove their giant rubber snake right in our faces from the word “go” (I know, that sounded dirty, but bear with me here). We get only brief flashes of the monster for most of the movie. That mystery helps make scenes more intense and suspenseful, allowing our minds to fill in the blanks on the specifics of the monster.
We do, however, see what this giant, venomous beast can do: people are tossed like bloodied lawn darts across rooms, gaping bite wounds are ripped into flesh, and the effects of the snake’s deadly poison are pretty damn potent (like the poster says, you scream, you expand till you look like some effed-up version of the Michelin Man, and your flesh sort of bursts open like a gooey piñata). So, if you want to see demonic snakes, people melting from deadly venom, and Oliver Reed chewing up scenery like it’s made of Twinkies, check out “Spasms”! It’s a bit hard to find, but you may be able to locate it on VHS, and there is also a new Blu-ray release from Code Red. If you've enjoyed this review like many others on this blog then be sure to check out Neo Trash Video on Facebook for all things B-Movie and 80's related. Thanks!