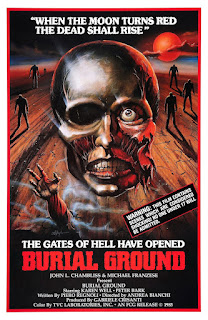 Readers, I have a confession to make: I love bad movies. “Troll 2”, “The Room”, “The Abomination” (maybe the subject of a future review)… I love them all. I’m sorry, I just can’t resist a movie that was made with the best of intentions, but, for one reason or another, turned out awful, or completely subverted my expectations. That being said, I cannot imagine how grindhouse theatrical audiences reacted when they first saw 1980 Italian release “Burial Ground” (also known as “The Nights of Terror” [or, as hilariously misspelled in the theatrical trailer “The NIHGTS of Terror”], “Zombie Horror” and “Zombi 3”… Whew!). I can’t help but wonder: Were viewers confused? Angry? Bemused? Disturbed? Or all of the above? I suspect the latter is the case.

On first viewing, maybe because I’d seen and enjoyed both “Zombi” (AKA George Romero’s “Dawn of the Dead”) and “Zombi 2” (AKA Lucio Fulci’s “Zombie”), my first viewing of “Zombi 3” (AKA “Burial Ground”) was maddening to me. I thought it was just a cheap, silly mixture of bad acting, dumb writing, shoddy dubbing, terrible music, and hit-or-miss gore effects. It’s definitely NOT in the same league as the first two “Zombi” flicks. But, as I viewed it again multiple times, I fell in love with the absurdity of it all.  In spite of its faults (or, more likely, because of them) this movie is a heckuva lot of fun, and I came to find it very enjoyable.

The plotline is fairly standard zombie fare: A Professor’s research accidentally awakens a bunch of skeletal zombies that look like, well… people wearing dirty bed sheets and dollar store Halloween masks. Even though these ghouls have little else but dust left for guts, they are absolutely starving for human flesh. Good night, Prof! 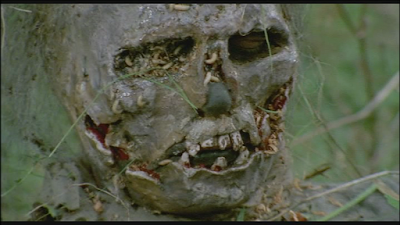 Smash cut to a convoy of cars headed to the Prof’s country estate for a nice weekend getaway. There are several virile couples (who later get it on in inevitable Euro-softcore fashion), and one woman traveling with her main squeeze and her very creepy teenage son named Michael (played by Peter Bark, who was actually in his twenties, but was much shorter and looked much younger due to a medical condition).

Upon arriving, they find the Professor mysteriously absent. However, no one seems to care, and continues to drink, diddle, and generally have a good old time. Soon an army of the undead arrives at their door, and chaos ensues, with many tropes of the zombie genre on full display: only head shots can kill them, they shamble around like Boris Karloff after 3 bottles of whiskey, and they just can’t seem to quit munching on intestines! This may sound generic to most zombie fans, but there are plenty of things to separate this movie and make it memorable. Most of these qualities can be seen as negative, but for lovers of bad cinema, “Burial Ground” is gold.

For one thing, the writing is truly strange: a lot of attention is paid to silly, needless dialogue. Characters are constantly saying lines that only reiterate things that have just happened. For example, when two characters first encounter a zombie, they spend a hilariously LONG time discussing what it is, confirming that it’s a walking corpse (or some kind of monster), and that they should leave, before making any move to flee! The dialogue that isn’t redundant usually sounds stilted and fake, on account of the awkward ADR.  In addition to the extreme zombie violence (including a very unusual scene of zombies intelligently using weapons to kill), the plot contains a fair share of nudity and sexy time, and sleazy, weird overtones of incestuous attraction between Michael and his mother. *Shudders* Creepy! 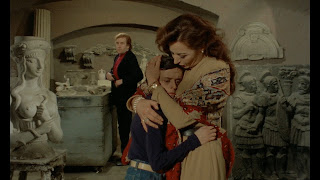 The makeup effects are uneven, but mainly hokey; Some gore effects and zombie makeup jobs are definitely better than others. At their best, they look somewhat like the Templar zombies in Amando De Ossorio’s “Blind Dead” zombie series. At their worst, they look like rejects from your local middle school’s haunted house. Also, did you know that when you shoot zombies, gooey green slime (or sometimes milk) oozes out? 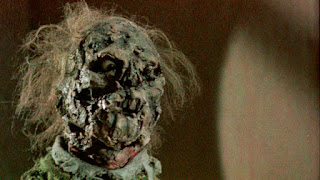 The acting is, for the most part, overbearing and hammy. The performances of Mariangela Giordano and Peter Bark as mother and son are standouts for Giordano’s frequent screaming and scenery chewing, and for Bark’s sheer creepiness and thousand-yard stare.  At the film’s finale, there is a particularly shocking, nasty scene that finally makes it clear why twenty-year-old Bark was cast to play a young teenage boy. *Shudders again* Super creepy!

Not to be outdone in the soundtrack department, “Burial Ground” also sports some of the worst music I have personally heard in any zombie movie. It’s a weird mix of upbeat jazzy interludes, staccato brass musical stings (especially when people get bitten), and the rest of the music sounds like a three-legged cat is prancing back and forth across a Casio keyboard. 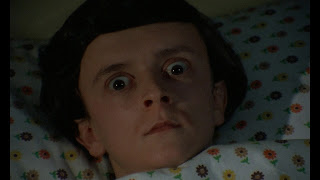 Anyway, I think I’ve sung enough of this movie’s praises. Director Andrea Bianchi has given us a sleazy, sick, and sublimely stupid gift. If you are intrigued, check it out! “Burial Ground: The Nights of Terror” was released on DVD by Shriek Show, and is on Blu-Ray from Severin Films. 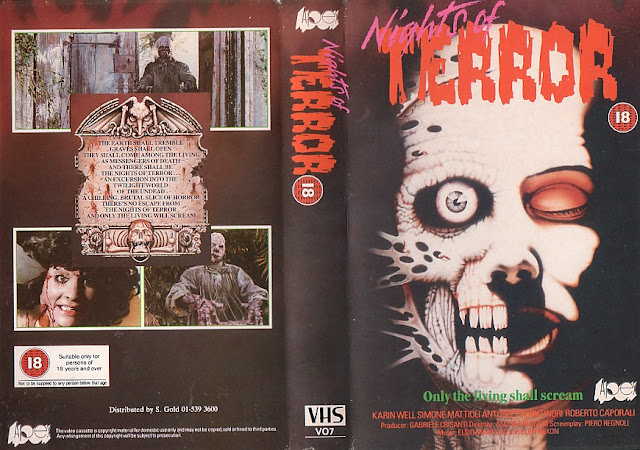