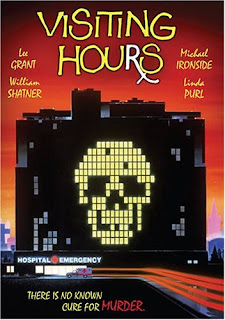 Lisa- “Christ, you really blast them all, don’t you? Blacks, Jews, Mexicans…You want the whole goddamn world to yourself?”
Colt- “…Yeah, I’d like that.”

Meet Colt Hawker (played by Michael Ironside). He’s a middle-aged white male, working on a cleaning crew at a TV station. Colt is also a first-class hateful, misogynistic bigot. The above quote should give you an idea what kind of individual we’re dealing with here. His rancor extends to many people, but most of all to women; He hates them, and has no use for them, except as objects. Colt has many charming pastimes. He enjoys writing angry, invective-filled letters to people, like some kind of proto-Internet troll. Colt also takes pleasure in stalking, photographing, torturing, and eventually killing women who offend his delicate sensibilities.

TV commentator Deborah Ballin (played by Lee Grant) does just that when she publicly defends the actions of Janet Macklin, a woman who shot her abusive husband in self-defense. Y’see, when Colt was just a young lad, his dear old domestic-abusing, woman-hating dad (like father, like son, apparently) was seriously injured by Colt’s mother in an act of self-defense. And in Colt’s twisted brain, a woman who steps out of line with a man (let alone a woman who would actually fight back against one) is better dead than alive. So, Colt sets out to totally destroy Deborah Ballin… 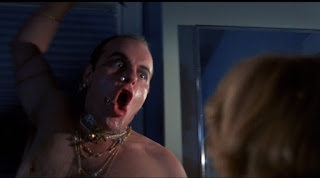 After surviving a horrific attack by Colt in her home, Deborah is rushed to the local hospital for emergency treatment. But Colt is no quitter, and he’s not through yet. With diabolical cunning, he uses every trick in the book (and then a few more) to reach Deborah, and wipe her off the face of the earth. Tension mounts as hour by hour, victim by victim, Colt zeroes in on his ultimate target, leaving a trail of bloody bodies in his wake. 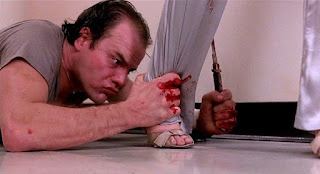 I found “Visiting Hours” to be an exceptionally effective entry in a small “hospital horror” movie trend having begun in 1981 by “Halloween II”. Soon after the success of “Halloween II”, several more flicks appeared offering viewers slasher thrills in sinister medical settings, most notably “X-Ray” and “Visiting Hours”. Though “Visiting Hours” was notoriously banned as a “video nasty” in the United Kingdom for years, and has been dismissed as just another work of “Canuxploitation”, I think it is polished, and, overall, very well done.

The acting in “Visiting Hours” is quite impressive. Michael Ironside’s portrayal of the psychopathic Colt is absolutely chilling. One can feel his contempt and rage bubbling just beneath the surface, always threatening to volcanically erupt into brutal violence. Lee Grant’s portrayal of Deborah as a smart woman in jeopardy is quite heartfelt and effective. She knows Colt is out to get her, but just about everyone around her (including Deborah’s station manager boss, played semi-sleazily by William Shatner) offers her soothing platitudes. 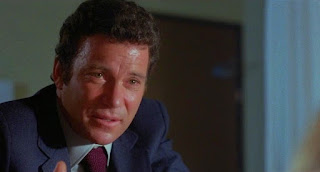 “Relax, you’re safe. There’s nothing to worry about. He’s not coming for you, etc, etc.” This, of course, is utterly harrowing for Deborah. Linda Purl gives an excellent performance as a nurse who believes Deborah’s concerns are real, and becomes determined to protect her from Colt’s wrath.

These well-drawn characters are a refreshingly far cry from the mute madmen and vacuous victims we commonly see inhabiting slasher flicks. The characters in “Visiting Hours” may be its biggest draw; With fleshed-out backgrounds, feelings, and motivations, the viewer almost can’t help but relate to them, and root for (or, in the case of Colt, against) them.

“Visiting Hours” also boasts great locations (it was shot in an actual military hospital in Quebec), solid cinematography, and a driving, vintage 80’s synth score. Also, with its thoughtful writing, “Visiting Hours” has thrills, twists, and tension to spare. It is a visceral and intense exercise in terror that may leave you shaken.

“Visiting Hours” was released on DVD by Anchor Bay in 2006, and was also paired with “Bad Dreams” in a 2 disc DVD set released by Shout Factory in 2011.