“The television screen has become the retina of the mind’s eye.”

“There is nothing outside of our perception of reality, is there? You can see that, can’t you?”
- Professor Brian O’Blivion in “Videodrome” 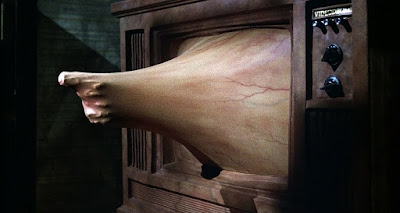 Reader, consider this: How much time do you spend interacting with a screen every day? This includes, but is not limited to the following: using a computer for work, self-checking out at a supermarket, texting a friend, updating a social media site, withdrawing cash from an ATM, purchasing products online, playing a video game, binging on a particularly addictive TV show, or flirting with potential mates on a dating website. 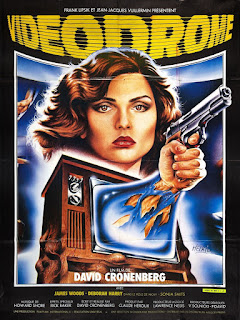 Do you get more tasks accomplished and more information assimilated by interacting with a SCREEN than you do interacting face-to-face with PEOPLE? Therefore, aren’t SCREENS a seamless substitute for REALITY?

In this increasingly virtual world we live in, “Videodrome” comes off as more interesting and relevant every year. This mind-bending techno-thriller wasn’t fully appreciated upon its initial release.  In 1983 Universal Studios, apparently ignorant of its full potential, or nervous about its bizarre (not to mention sexual and violent) subject matter, mercilessly re-cut “Videodrome” prior to its theatrical release. The end result was confusing and ineffective, to say the least, and the movie tanked. Luckily, the director’s cut was later released on home video.

The plot of “Videodrome” surrounds Max Renn, who is well-played as a somehow-charming slime-ball by James Woods.  Max is part owner of cable channel 83 Civic TV, which specializes in extreme fare; Lots of softcore sex and hardcore violence. Max defends his programming choices by claiming that viewing violent or sexually explicit entertainment serves a cathartic function; that experiencing such extreme programming gives people an outlet for their anger and frustrations, so they are less inclined lash out and commit real crimes. “As far as I’m concerned, that’s a socially positive act,” Max claims at one point on a talk show. “Better on TV than on the streets,” Max later says to a co-worker regarding violent programming. 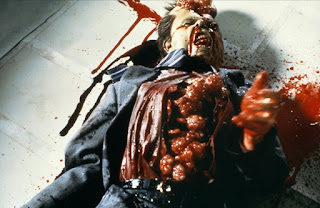 In search of new programming for Channel 83, Max stumbles upon a potential goldmine in pirated footage of a graphic broadcast called “Videodrome”. On this delightful show, a seemingly endless series of nameless people are tortured mercilessly in a dungeon outfitted with an electrified wall and various weapons. Immediately, Max is intrigued, and asks his video pirate friend finds him more “Videodrome” footage. Soon, Max discovers this torture-porn variety hour is apparently being broadcast from Pittsburgh (?!). Then, even after Max hears sinister rumors that the victims and violence on “Videodrome” are REAL, and he suffers from bizarre hallucinations after watching it, he still wants to know more, and continues to dig. Unless you want to have some (but not all) of this movie’s surprises spoiled, get ready, because…

Max  eventually learns about a devious plot being cooked up by a corporate CEO: by beaming a subliminal signal (code-named “Videodrome”) over explicit, violent, or otherwise offensive programming across North America, The Elite hopes to use the signal’s deadly side effects (cancerous brain tumors), to kill off those who watch it. Eventually, sedentary, soft, and subversive types would be cleansed from the population. Those left alive would then be a new, stronger humanity to rule the world. Jeez! And you thought dealing with YOUR cable company was a pain in the ass!

However, Max, unlike all others associated with “Videodrome” testing, does not die of a brain tumor. Instead, the signal mutates Max’s brain, and gives him the power to mutate reality. The rest, as they say, is history! 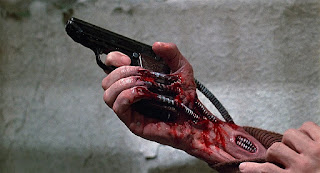 In my opinion, despite the fact that some elements may feel hokey and out of date, “Videodrome” is a visionary film that melds speculative science fiction with visceral body horror, and was years ahead of its time; Cronenberg’s themes of virtual reality and reality becoming seamless, the “dehumanization” of humanity by technology (not to mention the idea of the media being used as a tool to manipulate the masses) are stronger and more timely today than when it was first released. There aren’t many films you can say that about, and truly, un-ironically, mean it.
“Videodrome” has appeared on DVD several times, including a 2004 release as part of The Criterion Collection, and was also released by Criterion on Blu-ray in 2010. 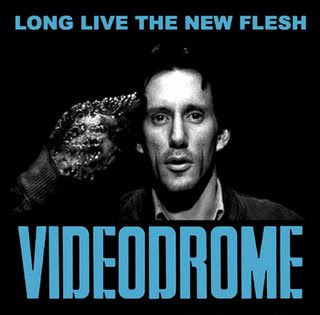