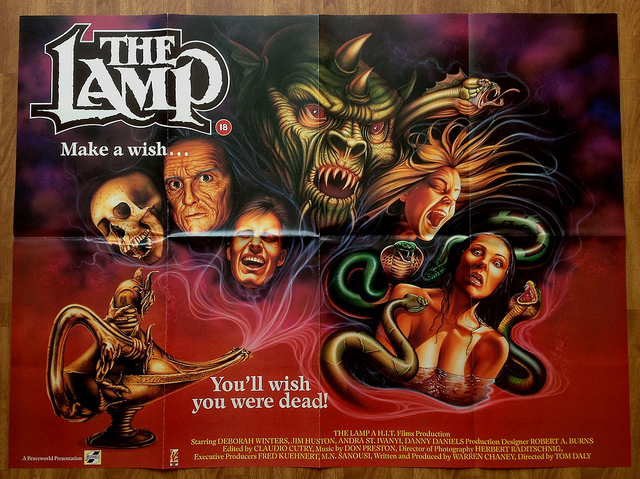 Fans of “Night of the Demons” and “Evil Dead 2”, take note: I’ve got a movie you just might love! 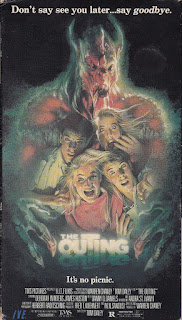 The story goes like this: a couple of bumbling burglars who behave like The Wet Bandits on bath salts (with an equally intelligent and appealing lady friend in tow) mercilessly murder a defenseless old woman, and steal a valuable “Aladdin”-esque lamp from her. But some lamps are not meant to be rubbed! Soon these crooks find out the irrefutable truth about the genie inside: It’s a downright evil demon so-and-so! (But, hey, “Wishmaster” hadn’t come out yet. How could they possibly have known?) So, the Genie in the lamp dispatches the burglars in outrageous fashion. Then, the lamp winds up at a museum, where the Genie really gets to strut its stuff.
We are treated to, in no particular order: Human shish kebab, bodies ripped telekinetically in half like paper dolls, zombified people and animals attacking the living, death by ceiling fan, gobs of brains and gore, sometimes cheesy, but memorable, creature and pyrotechnic effects and who can forget that creepy green light… The end result, though about as dumb as it sounds, is a heckuva lot of fun!

The writing and directing (by Warren Chaney and Tom Daley, respectively), although sometimes clunky, is full of touches that are snappy and funny. The production design (by Robert Burns, of “Texas Chainsaw Massacre” fame) is excellent. “The Lamp” is filled with cool sets, and the use of garish, multicolored lighting is reminiscent of Bava or Argento.

The characters in this movie are more interesting than your usual ‘80’s stereotypes. In “The Lamp,” stereotypes are taken to sometimes hilarious extremes, as with the aforementioned wacky robbers, a goofy, absent-minded professor, and two totally 80’s sociopathic bullies (Spoiler alert! They get theirs). In addition to the stereotypes, we have a bunch of random comedic wild cards thrown in for good measure. For example, we have an ass-kicking, kung-fu-fighting female high school teacher. Yep. It’s true. And a mustachioed ginger security guard, who is also a world-class opera singer (?). 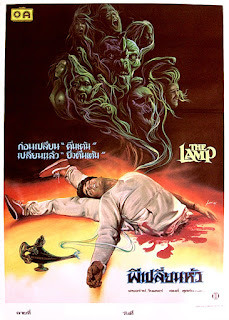 I don’t think critics realized “The Lamp” was supposed to be funny, like “Evil Dead 2,” or “Dead Alive.” I have a love for these movies because they are bloody, crazy, and deliberately hilarious. I nearly fell out of my chair laughing at the sheer outrageousness of “The Lamp.”

In conclusion, if you enjoy your horror gory, violent, and nonsensical, with tongue planted firmly in cheek, check out “The Lamp,” AKA “The Outing”, which you can see on Youtube here: https://www.youtube.com/watch?v=vzMrPpAIkJ4
“The Outing” is also now available in a multi-pack on Blu-Ray and DVD from Scream Factory.
https://www.shoutfactory.com/film/film-horror/all-night-horror-marathon-vol-1-4-films