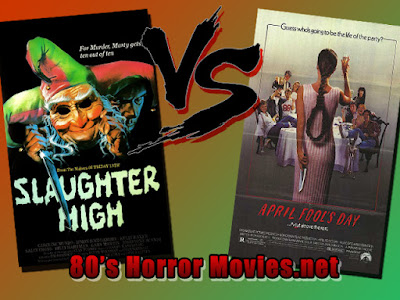 There has been a great deal of debate about which “April Fools’ Day” is better. It seems to divide people as much as political and religious ideologies. Fans of either movie have a very strong stance on which is better, and for good reason.
In spite of their titles, and some other common ground, these movies are quite different. “Slaughter High” is a low-budget independent exploitation movie that tries to cash in on the “Holiday Horror” trend/ slasher fad of the Eighties, with mixed results. “April Fools’ Day” is a bigger-budget Paramount Studios film (produced by Frank Mancuso of “Friday the 13th” fame) that tries to cash in fans of the “Friday the 13th” franchise by promising more of the same, but then twists itself from a slasher film into a whodunit. The end result is…well…more on that later.
In order to determine conclusively which movie is better, I’ve decided to give each movie up to 5 points apiece in 5 key categories: Plot, Characters, Production Design, Effects, and Resolution. Well, here we go.
PLOT:

“Slaughter High” follows a fairly conventional slasher plotline. You will find strong shades of the “Friday the 13th” series and “Carrie” in it. Here we have a masked killer (Marty, played by Simon Scuddamore) who’s out to kill a bunch of unpleasant characters (his former high school classmates whose careless prank disfigured him) in a variety of unpleasant ways.  The story, though unoriginal and rather simple, is one that any of us who were bullied in school can appreciate.
Sprinkled throughout the movie are some pacing problems, but also some nice shocks, a bit of suspense, and a few jump scares.
“April Fools’ Day”, on its surface, has a similar plotline. A bunch of over-privileged college kids start to (apparently) get stalked and killed over a weekend retreat on classmate Muffy St. John’s  newly-inherited island estate (sigh, first world problems). However, there is a bit of mystery to this: We don’t know who is targeting this group or why.

There is a fair bit of suspense during the stalking scenes, and a few good jump scares (Until the twist ending but, again, more on that later. Spoilers!). “April Fools’ Day” is, at its heart, a whodunit, set in a slasher universe.

Well, this is difficult. Both movies have a large number of (mostly) unlikable ‘80s character types populating them (“April Fools’ Day”, for example, has the self-obsessed Southern social climber, the super-jock Peeping Tom who looks like a date rapist, etc.) What can I say, the actors do okay with what they’ve been given. However, some “April Fools’ Day” characters are more fleshed out, and not just cannon fodder. I was also pleased to see Amy Steel, of “Friday the 13th Part 2” fame, playing another ballsy female character in “April Fools’ Day”. I’ve always liked her. In addition, there are some genuinely funny moments and lines of dialogue that are well-delivered by the actors.

Even though the characters in “Slaughter High” are mostly cardboard cutouts of ‘80s stereotypes (we have the class ass-clown, the motorcycle-riding jock, etc.), they do possess a certain dumb charm. You may ask “why?” Because, being a British production, most of the onscreen talent is also British. The result is an outsiders’ translation of American stereotypes, and it’s sometimes unintentionally hilarious. Accents ebb and flow through the dialogue, and the actors’ “American” posturing is quite funny.

“April Fools’ Day” was shot on a big studio dime, in British Columbia. Overall, it was slick, atmospheric, and well-shot. It felt like a “Friday the 13th” movie in terms of lighting, color, and composition.
“Slaughter High” was shot on a shoestring in an abandoned insane asylum, and it shows. Even though the set looks a little like a high school, it is gritty, grimy, and adds a bit of production value to the movie.

“April Fools’ Day”, having a studio budget, has some decent effects. However, we hardly see ANYTHING AT ALL. Why? There are VERY few violent scenes in this movie. This movie’s almost total lack of bloodshed has led to it being shown ad nauseum on cable TV in the past. Even in its uncut version, it’s very tame (If you watch to the end, or read to the end of this review, you’ll understand why). 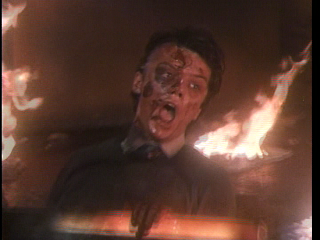 “Slaughter High,” on the other hand, is chock-full of special effects: Spilling blood, squirming guts, and burning skin and flesh. It’s like a scene out of Dante’s “Inferno” compared to “April Fools’ Day”. Some of the effects are good, some not so good. But that’s true of most horror productions, so I’m willing to forgive.

“Slaughter High” ends on kind of a cop-out note, having a large portion of the movie turn out to be a dream Marty has in his cell in the mental ward, where he’s been since his classmates disfigured him. However, I think it’s safe to assume Marty will be making his dreams come true very soon (insert evil laugh here).
“April Fools’ Day”’s ending is, to me, worse than a cop-out. Turns out, all the mysterious disappearances and presumed deaths are (ready for this?) an elaborate prank Muffy St. John played on her friends. Her motivation: To prove to her family that she can be a successful ‘80s entrepreneur by turning her newly-inherited island into a Murder Mystery Resort. So, she assembles some actors, and cooks up a ridiculous scenario where her friends were pursued, trapped, and terrified that they are going to be the next victims of Muffy’s fictitious psychotic twin sister Buffy (Like, omigod! What a twist!).
Some people think this was a good, clever direction to take the movie. I cannot disagree more.
See, part of the reason for the popularity of slasher movies is the audience gets a cathartic thrill out of watching these stereotypical characters getting murdered in outrageous ways. In a slasher, if no one gets killed, there’s no appeal, no payoff, or even a real story.  And at the end of “April Fool’s Day”, not only does no one die, every one of these dumb yuppie wankers gets to drink their own bottle of champagne! Come on, Paramount, what were you thinking?! You can’t sell “April Fools’ Day” as a slasher movie, when it’s just a “Scooby Doo” episode in disguise!
The only way “April Fools’ Day” could be enjoyable is if the studio had used the ending that wound up in the movie’s novelization: In that version, all of Muffy’s friends, enraged that they have been manipulated in such a way (much as I felt after watching this movie), turn on her, and kill her. Yeah! Now that’s a horror ending!

So, in conclusion, “Slaughter High” wound up with 16 points out of a possible 25. It’s half-assed and cheap in many ways, but as a holiday horror/ slasher movie, meh, it still gets a passing grade.
“April Fools’ Day” wound up with a pathetic 11.5 points out of 25, at least when judged as a holiday horror/ slasher movie.  As a horror movie, it simply doesn’t work. However, when judged as a movie embodying the spirit of April Fools’ Day itself, it scores higher, maybe 17 or 18 out of 25. After all, “April Fools’ Day” does go out of its way to fool its audience, and kind of succeeds. I just wish the ultimate gag on its viewers was more satisfying.