Just Click on The Titles to Watch. There are some real hidden gems here for 80's Horror fans! 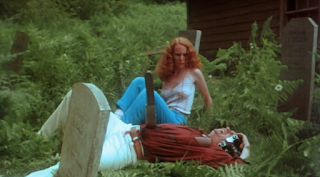 Five campers arrive in the mountains to examine some property they have bought, but are warned by the forest ranger Roy McLean that a huge machete-wielding maniac has been terrorizing the area. Ignoring the warnings, they set up camp, and start disappearing one by one. If that sounds too run-of-the-mill, there's a genuinely shocking plot twist half-way through...

The overnight stock crew of a local supermarket find themselves being stalked and slashed by a mysterious maniac.

INTRUDER is without a doubt one of the last great slashers from the genre's peak decade. RareSlashersReviewed

An old orphanage has just been rebuilt after it was mysteriously burned to the ground over a decade ago following accusations of child molestation and abuse by Martin, whose own father committed suicide out of shame. Needless to say he couldn't prove his innocence, suffered a psychotic breakdown which subsequently led to him systematically slaughter the other occupants, including the kids, particularly the accusers, before perishing in the blaze that followed. Now a group of med-students are brought in by a seemingly benevolent doctor turned pediatrician, Jerry who seeks to fix the place up as less an institution more of a foster home. One of the students is set on dwelling there at this current position, while the others are set on helping them settling in. But soon they'll discover that our current owner has been secretly disposed of by an intruder, who is still lurking close by

On the night of Halloween, 10 teens decide to go to a party at an abandoned funeral parlor. "Hull House", rumored to be built on an evil patch of land & underground stream, is the place. While starting the party, the teens gather around a big mirror to perform a seance...BIG MISTAKE. They awaken some evil force and find themselves trapped and taken over one by one. Now it's a battle for who can survive and cross over the stream before going to hell....

Just before Halloween, three kid brothers who are alone in a big house are menaced by three escaped mental patients who have murdered some traveling circus clowns and taken their identities.


This one always gets a lot of controversy. Just don’t dig too deep into the director and production of this movie until after you’ve watched it. There were some real horrors going on behind the scenes….

A slow burning masterpiece. Watch this alone in the dark and it will haunt you.

Peter Medak's The Changeling is among a handful of films, including The Haunting (1963), Ghost Story (1981), and Lady in White (1988), that have successfully recreated the intimate, drawing-room atmosphere of supernatural horror fiction.

After his wife and daughter are killed in a snowbound car accident, classical composer John Russell (George C. Scott) relocates from New York to Seattle to teach at his alma mater. Looking for a quiet place to rest and continue writing music, he is referred Claire Norman (Trish Van Devere) at the Seattle Historical Preservation Society. Claire shows John a large, sparsely furnished estate in the outlying countryside. He takes the house, appreciating its remoteness and the solitude it might afford, and diverts himself by renovating and settling in. He even starts to compose, putting aside his older work in favor of a new, sentimental piece for the piano.
It is not long, however, before he begins having nightmares about the accident that killed his wife and daughter. Possibly because of this trauma, he is open to communications from the house's ghostly occupants.
Those looking for a similar experience in movies will appreciate The Changeling as a gem in the horror genre. 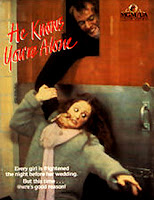 
A bride-to-be is being stalked upon by a serial killer. She gets help from a former lover, but will they manage to escape?

A young Tom Hanks stars in He Knows You're Alone. special FX by Tom Savini (Friday the 13th parts 1 and 4) 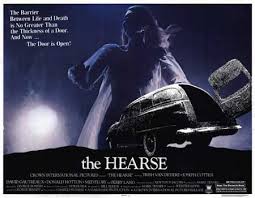 Jane Hardy decides to stay the summer in the house her aunt left her when she died, to try and recoup from a bad divorce. Little does she know, her aunt practiced witchcraft and is still thought of very badly by the town's citizens. As soon as she moves in, she is haunted by a old black hearse and it's creepy driver. Is she going insane or is she truly being menaced? She meets a friendly young man and becomes involved with him, but is he and the creepy driver one and the same? 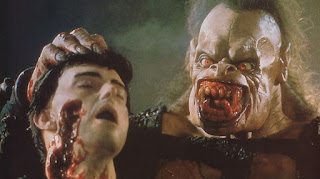 Ireland will never be the same after Rawhead Rex, a particularly nasty demon, is released from his underground prison by an unwitting farmer. The film follows Rex's cross country rampage, while a man struggles to stop it. Howard Hallenbeck (David Dukes) is an American professor who travels to Ireland to research items of religious significance...


Taking a wrong turn, travelers find themselves trapped in a mysterious house. One horror after another threatens them as the sorcerer who lives within needs sacrifices to give eternal life to his beautiful bride.