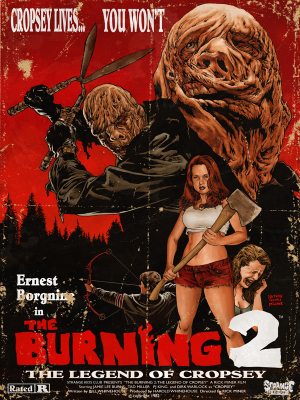 I wish this movie really existed, the original The Burning was one of my favorite 80s horror movies. Great poster!

Strange Kids Club is very excited to announce our latest project, kicking off this October with the release of its collector’s art print series based on horror sequels that don’t, but certainly SHOULD, exist. The series will include three prints, each brought to life by a different artist. The first poster in the series, “The Burning 2” by artist Nathan Thomas Milliner was unveiled last week.

When contemplating our first series of art prints we decided that, rather than covering any mainstream films, we would delve deeper into movies that true horror fans would appreciate. This series is total fan service to them, the horror-loving cinephiles who have always wanted to see more of these classic monster movies, but never had the chance.
Selecting Nathan Thomas Milliner for THE BURNING 2 was a natural fit considering his distinct style for slasher icons like Michael Myers, Freddy Krueger and Jason Voorhees. Nathan brings an insane amount of realism to his art that was perfect for resurrecting the scarred campground stalker known as Cropsey (aka Cropsy).

"I came up in the horror game as a slasher fan and it was characters like Freddy, Jason and Michael that I cut my teeth on," said Milliner. "To be perfectly honest, I had only seen The Burning once before choosing to do this poster. I also hadn't drawn Cropsey before and I had always been interested in doing so since Tom Savini's design and make-up are just wonderful. To me, the highlight of what needed to be done was that make-up. I wanted to see that make-up on a large scale so a big close-up of Cropsey was a must. In the end, I can say the poster was a lot of fun to produce and I hope that the fans out there really dig it and stop and think... WHAT IF?"