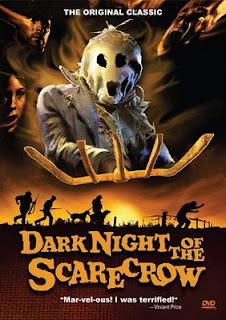 I can't believe this gem of horror is finally being released on DVD. I'm glad VCI Entertainment stepped up to the plate on this one, just like they did when they released Gargoyles, which is another made-for-tv classic. Dark Night of the Scarecrow has everything going for it and then some. It's got actors who know how to act, spooky atmosphere, a decent script, great kill scenes, and of course, a healthy does of the supernatural.