Ten years ago something terrible happened in this house... This weekend it's about to happen AGAIN.

Driving up to the mountains, Connie, (Kim McKamy) Johnny, (Steven Baio) Tina, (Jody Gibson) Mark, (Myles O'Brien) Sammy, (Tony Griffin) Barney, (Jerold Pearson) and Betty, (Karyn O'Brien) arrive at a remote house to help clean it up for a friend. When they realize that they're all alone for the weekend, they try to do the work by themselves and nearly get the job finished. When clues start to add up that something is wrong with their friend, they also find that there's nothing to worry about as well. When they suddenly start to realize that there may be something else going on, they stumble across a maniacal killer righting wrongs for a past incident in the house, forcing them to get out of the house away from the killer. 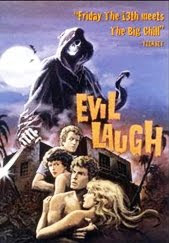 "Evil Laugh" isn't a masterpiece,but it works as a cheesy slasher flick-and I mean REALLY cheesy slasher flick.There's some nudity and plenty of gore.I love especially the scene when one moron gets a machete through the groin.Oh,and there is this stupid sequence where someone has his head microwaved while the door is still open-yeah,right!!!The acting is completely awful,but overlook that and you have a cheesy,completely unscary,but funny as hell slasher.Watch it in pair with another cheesefest "Psycho Cop" and you'll have lots of fun. WATCH FOR FREE HERE