Night of the Creeps on DVD FINALLY !

Night of the Creeps (1986) GREAT MOVIE ON DVD FOR THE 1ST TIME
I had to get a bootleg copy of this fron England a few years ago but it's finally coming out on DVD October 27 2009 and available for order HERE from Amazon for $13.99 .
"The good news is your dates are here. The bad news is... they're dead."
In this campy chiller, a college couple at"Corman University" in 1959, see an object plummet to Earth like a meteor. The boy accidentally swallows a space-slug that shoots out. In 1986, two freshmen roam the campus and stumble across the corpse of the boy who swallowed the space-slug. Once thawed out, the corpse comes to life. 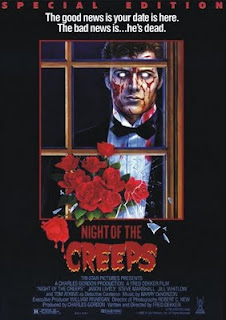 TRIVIA : Grafitti on the wall of the men's room where J.C. is trying to escape a number of slugs reads, "Go Monster Squad!". The Monster Squad (1987) was also directed by Fred Dekker.

The movie the house mother is watching on TV is Plan 9 from Outer Space (1959).