“ANGUISH” 1987
“During the film which you are about to see, you will be subject to subliminal messages and minor hypnosis. This will cause you no physical harm or lasting effect. But, if for any reason you lose control, or feel that your mind is leaving your body, leave the auditorium immediately.”- Onscreen text introduction to “Anguish”
“It’s only a movie.” – Linda in “Anguish”
I’ve been toiling at a nearly impossible task; I’m trying to review “Anguish” in an engaging and fascinating way that will intrigue people who haven’t yet seen it, without dropping a boatload of spoilers (I HATE spoilers). However, one can’t make an omelet without breaking some eggs, and it will be necessary to reveal a FEW intimate details of this movie. However, I hereby pledge to reveal fewer plot twists and turns than any critical review for “Anguish” I’ve yet read. I swear. 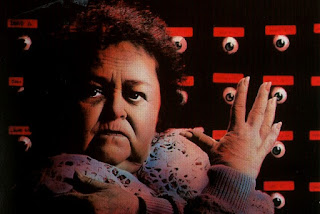 Here we go: “Anguish” opens by introducing us to a middle-aged Mama’s boy named John (played with naturalistic neurosis by Michael Lerner) and, of course, his Mother (the tiny but powerful Zelda Rubinstein, or Tangina to all you “Poltergeist” fans out there). These two make an extremely odd and creepy twosome. Mother and son share a psychic link that’s never really discussed, but I like the mystery of that; I think it makes things more interesting. See, Mother can remotely listen in on her son’s day at his job as a hospital orderly by… putting a seashell to her ear (!). Yeah, pretty surreal stuff. But wait, there’s more!
As if snooping around her son’s mind isn’t enough, Mother hypnotizes John (and, presumably, some of the audience as well, if you believe the film’s introduction) to make him less of a grade-A wussy-pants…I guess? Oh, who cares! The result: Things escalate quickly, and John goes on a vicious killing spree. After he kills, he removes his victims’ eyeballs to add to his collection. Of eyeballs. Yeah, pretty nasty stuff. 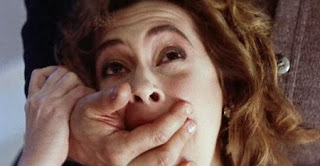 Okay, here’s where things get tricky. Just when you think you’ve got a handle on the plot, something happens which changes literally everything. Here is the point where I do have to release a spoiler. If you want to be totally surprised, skip it. If you’re intrigued, read on. I promise that if you watch the movie after reading this, there will still be plenty of surprises.
SPOILER ALERT:

About 20 minutes or so into “Anguish,” we discover we’ve been watching a movie the whole time. No, I mean, as we’re watching John’s grisly story unfold, the camera pulls back, revealing it’s a projected image on a vast screen. We are actually in a packed theater, full of frightened and freaked-out patrons watching John kill people in a horror flick called “The Mommy” (Still following me?). So now we’re watching two parallel stories unfolding simultaneously. And, believe it or not, what’s happening in the theater aisles is just as interesting as what’s happening on the screen!
END OF SPOILER!
I won’t reveal any more of this bizarre, mind-bending experience for anyone. And, true, the effect of seeing this film on home video won’t be the same as seeing it in a theater (especially the whole hypnotism gimmick, a bit of business that would have made William Castle proud), but I will continue to sing its praises.
“Anguish” is a potent horror thriller that boasts many delights: Great performances (especially from Lerner and the scenery-chewing Rubinstein), production design, camera work, lighting, and gore effects, to say nothing of the sure-handed writing and direction. With “Anguish”, co-writer and director Bigas Luna (1946-2013), who was known for his art house films, has given us a very strange and unique terror movie; it is spiked with outrageous plot twists and shifts of reality, and is very cleverly structured. In spite of (or perhaps because of) its sheer audaciousness, “Anguish” never falters.
“Anguish” is available on DVD and Blu-Ray from Blue Undergound (out of print). Check it out if you like twists. But if you have a problem with eye violence, avoid this movie at all costs!