“Black Christmas.” “Halloween.” “My Bloody Valentine.”  “April Fools’ Day.” Most horror fans swear by these “holiday horror” films. For whatever reason, however, a lot of folks have never watched “MOTHER’S DAY.” How, I wondered, has this twisted holiday horror opus (which, might I add, is horrormeister Eli Roth’s favorite horror film ever, and was also shot across the street from where  “Friday the 13th” was shot, at the exact same time!) gone unseen by so many horror fans? To help remedy this situation right now, here’s a review! 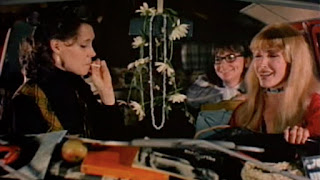 Okay, here we go. The plot goes like this: Our main characters are three former college roommates, now thirtysomethings who have achieved varying levels of success in their personal and work lives. (We have Trina, a glamorous Hollywood resident, Jackie, a put-upon New Yorker with low self-esteem, and Abby, an energetic but pent-up Chicagoan who has been taking care of her sick mother.) Every year they spend a weekend together. This year, they’ve decided to go backpacking and camping in an isolated stretch of woods in New Jersey called the Deep Barons.
Unfortunately for them, the Deep Barons are home to the most twisted family since Charlie Manson roamed Spahn Ranch: There’s sweet-looking old Mama (played with admirable gusto by Rose Ross) and her two degenerate sons Ike and Addley. Mama has been teaching her boys the finer arts of kidnapping, raping, and torturing random women. (Jeez! One shudders to think what kind of ugly upbringing Mama must have had to instill these horrific habits in her own children!) 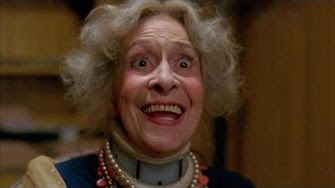 Anyway, the boys capture our trio of heroines, and do their worst. But, after a battery of devastating physical and mental abuse, the women strike back…with a VENGEANCE! (Oh, hello, is this a can of Drano? And pass me that electric turkey carver, will you?...) You may find yourself getting a tremendously cathartic thrill from watching this effed-up family get their just desserts, in outrageously violent fashion.
This grim rape revenge scenario may seem familiar, but make no mistake: “Mother’s Day” is not just another heavy clone of “I Spit on Your Grave” or “Last House on the Left,” or the other rape revenge horrors that came before it. What sets “Mother’s Day” apart, for me personally, is that co-writer/director Charles Kaufman saw fit to inject a surprisingly large amount of humor into it. With reckless, madcap abandon we are served extreme violence, 80’s sleaze, cheesy comedy, and some utter randomness side by side. Somehow, Kaufman keeps this schizophrenic-feeling film balanced so when he delivers laughs and/or shudders, it never feels like he’s sacrificing one for the other. Also, the humor makes the extreme violence and depravity go down easier. 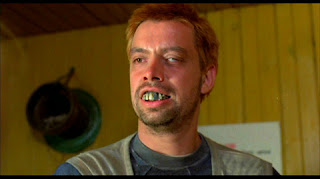 In addition to all these goodies, “Mother’s Day” also has a great deal of production style, scripting cleverness, and character development, especially in regards to our heroines. We really get to know and like Trina, Jackie, and Abby, so when things go bad we are right there with them. And we’re equally on board when they seek bloody, nasty revenge.
A wholly satisfying and unforgettable experience, “Mother’s Day” is definitely worth your 90 minutes! You can watch it here on YouTube:
https://www.youtube.com/watch?v=B4DMs-UepHc
Email ThisBlogThis!Share to TwitterShare to FacebookShare to Pinterest
Newer Post Older Post Home