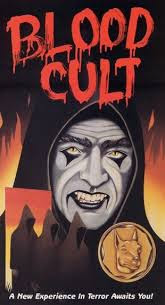 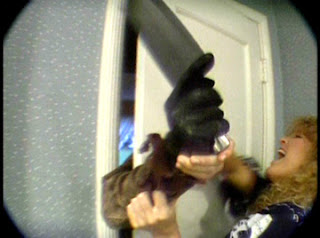 Throw some Jiffy Pop on the stove and fire up the top loader (love that sound) cause it's October and if you're like me then you've already begun your 2015 Horror play list. When it comes to 80's slashers, you've got Freddy, Jason and The Shape (AKA Michael) but what about The Figure? You know, from the self proclaimed, first-ever, straight to home video, movie Blood Cult (1985)? Written by Stuart Rosenthal and James Vance and Directed by Christopher Lewis who also directed The Ripper from the same year starring practical effects legend, Tom Savini; Blood Cult being eclipsed by the later. With a score of 3.4/10 on IMDB and a lack of a official score entirely on Rotten Tomatoes, a first time viewing of Blood Cult is usually followed up with a patronizing "Wow". It also had the audacity to use the alternate title of simply, "Slasher" and its original title, The Sorority House Murders, sums up the premise of the film. So what IS the premise? 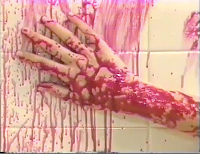 Sorority girls start dropping in Oklahoma, with each one of the victims missing a particular body part. Discovering "Canis" gold coins at every crime scene suggests that the campus is being targeted by a cult. Geriatric hero, Ron Wilbois is on the scene to solve these strange murders while devouring Arby's roast beef sandwiches.

Blood Cult doesn't break any molds aesthetically. In fact, it almost feels like a parody of the slasher genre. With its high keyed sequences, fluorescent blood, mono sound and atrocious acting. On occasion you'll see the lens ring bordering the frame, along with the top of the walls from their one and only set they built and even the boom operator can be found standing in the scene.

So why post about Blood Cult if it has no redeeming qualities? To be honest, I actually love and respect this film, much like the majority of other straight to video slashers. To a budding film-maker it feels like a feature length student film and with a budget of only $27,000 it practically was. Ninety minutes of amateurs discovering the ins and outs of of visual storytelling. Even though this film fails in quality it inadvertently broke the barrier and opened the flood-gates for the U.S. home video market. "But I thought David Prior's Sledgehammer was the first S.O.V. released in the 80's?" Technically, it is, right after Boardinghouse's theatrical run but Blood Cult took it one step further by dropping over $100,000 on their advertising campaign which boosted their distribution. Quantity over quality. You had a higher likelihood of seeing a copy of Blood Cult on shelves than you would Sledgehammer. So it wins the S.O.V. argument by notoriety but loses on a technicality. 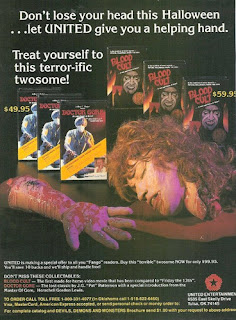 So here's a nod *raises glass* to the early 80's S.O.V. movement. Much in the way of Roger Corman; no longer would anyone have to work with a studio. If you had a vision, knew someone with deep pockets and could obtain a Betacam then you too could make a movie and have it distributed. LLoyd Kaufman and Charles Band know this method very well and if you're like me you have to screen their whole catalogue. You take the bad with the good but sometimes you just want a bad popcorn flick like Blood Cult.

Double feature DVD with both Blood Cult and its sequel, Revenge released by VCI for cheap. HERE.