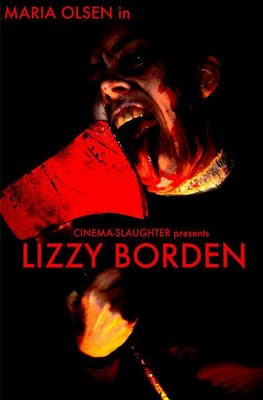 80s Horror;  How did you get involved in Acting?

Maria;  I've literally been on stage since I was six years old, but, as there was no film industry to speak of in East London, the small South African town that I grew up in, I was only able to make the transition from stage to screen after I moved to Los Angeles in 2005.  I remember watching the performances of such amazing actresses as Jane Fonda and Jodie Foster while I was growing up and thinking that, if I ever got to LA, I was sure I could do what they did.  Well - lol - now's my chance to find out, right?
80s Horror;  What did you do before you got involved in the movie business ?
Maria;  I worked for several firms of accountants in the bankruptcy administration departments, and actually practiced as a Bankruptcy Trustee for about 15 years.  I was constantly active in theater, though, and 2008 saw me make the final break from the accounting world when I chose to get into acting full time and appear in a show Off-Broadway.
80s Horror;  What do you do for fun?
Maria;  I work for fun...  Seriously, the saying that goes "do something you love and you'll never work a day in your life" is TRUE!  When I'm not acting, producing, directing or writing, though, I'm reading (usually horror!) or knitting my Scary Scarves =)
80s Horror;  Which has been your favorite character that you have performed?
Maria;  Although I have truly loved every role that I've played, the two that stand out so far is the guileless and extremely brave Sophomore in Tim Curley's fantasy/sci-fi feature "The Mudman" (which should be released in the near future) and the forbidding Mrs Dodds/The Fury in Fox's "Percy Jackson and the Lightning Thief

(Get It?)" is also a favorite, as is the mentally unstable nurse in Dan Donley's "Shellter

", and both of these films are now available online.  But there are so many amazing roles I've played - like the Demon in Claudia Damasceno's "Feed Me", Ophy Bork in David Molinari's "The Bork", and the Screaming Lady in Mark Edwin Robinson's "The Levenger Tapes" - that it's almost impossible to put one above another...
80s Horror;  What was your most challenging role so far and why ?
Maria;  One of my most challenging roles was The Mother in Damon Shalit's "African Gothic" as I performed the role in another language: Afrikaans.  Now, I am fairly fluent in Afrikaans but, at the time of shooting, I hadn't spoken it for over six years AND it was my second language, not my first, so AG was a fun and interesting shoot.  For physically challenging roles, "Percy Jackson

" must come out on top as I did all my own stunts including wire and harness work (which was absolutely FANTASTIC btw!).  As far as emotionally challenging roles go, I play intense and dramatic roles all the time so, for instance, being asked to sustain a crying fit on set for six or so hours is not unusual for me.  On set filming Jason Bognacki's feature "Another", I actually developed being emotionally available into a fine art as Jason likes say things like "OK, for this take, I'd like to see some tears...and...ACTION!".  I adore this sort of challenge, though, and Jason is, by the way, one of the most innovative and uniquely edgy forces in indie horror film making today, and I love the time I spend on set with him.
80s Horror;   What current or upcoming project are you most excited about?
Maria;   I'm attached to several horror feature films at the moment, and I'm really thrilled about being able to act in all of them.  On the list are Craig Ouellette's "Straight on till Morning", Steven Gladstone's "The Resurrection of Blake House", Cinephreak Pictures' (Jakob Bilinski's) "Visiting Hours", Mike Lopez's "Lizzie Bordon", Erik Herrera's "Ghostclown" and Carl Lindbergh's "Bunnyman 2".  I'm also getting into producing - as MOnsterworks66 - and, at present, I'm attached as producer to Jon Craig's "The Road Killer" and, as producer and, hopefully, actor, to Jane Whitney's "The Stranger", where I'm co-producing with Devra Sari Zabot.  Through MOnsterworks66, I'm also busy developing a number of feature horror projects, and I can see that I'm going to have LOTS of work to do in the future (BUT there's always room for more lol)...