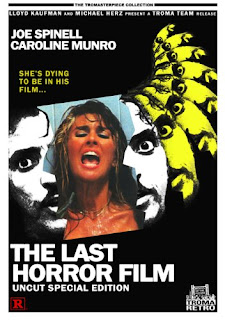 "The Last Horror Film" aka "Fanatic", is about a taxi driver from New York named Vinny (Joe Spinell best known for his iconic role in Maniac ) who's obsessed with the famous actress, Jana Bates. He leaves his mother after getting up money to go to the Cannes Film Festival to try and get her into a moie that he wrote, the only problem is he can't get to her. Now what do you do in a situation where you're obsessed with an actress but you can't get close because of heavy security? Go to anyone associated with her. He comes in contact with many people around her including her ex-husband, agent, producer, and others. And wadya know, they all turn up dead, starting with Jana's ex and director, but no one does much about the deaths because they think they're all just part of a joke. Now that everyone around her is dead Jana is free for Vinny's taking and it all comes down to the superior ending!


This film is great! It's definantly not your typical independent film. It's more! Alot more! You see the main character Vinny start to slowly crack and descend into complete madness. He calls his mother from time to time and breaks down. This film has less gore but more story than "Maniac". Definantly worth checking out, I recomend it to anyone. AVAILABLE HERE