The Deadly Spawn (1983) This is one of my all time favorites ! Two campers in the New Jersey woods have their outdoor fun interrupted by the arrival of a meteorite crashing nearby. They go to investigate the crater, but are suddenly attacked and devoured by alien parasites who have hitched a ride to Earth. After finishing off the campers, the hungry space monsters head for a nearby town, where they make their domain in the basement of an old house soon begin polishing off one hapless inhabitant after another. Four young teenagers, plus one pre-teen boy, try to find a way to stop the angry space monsters before they reproduce and literally eat humanity.WATCH THE TRAILER HERE  BUY IT ON DVD HERE 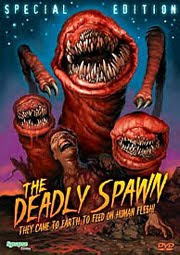 Trivia :The effects of the mini-spawns slithering across the floor in the basement was achieved by cutting a "S" wriggle into the floor, and pulling the spawns along under the floor.

The mother spawn was constructed in the basement of effects artist John Dods. However, no one took the creature's size into consideration, so when they had to have it on set, they had to cut off one of the creature's heads to get it through a doorway, and reassemble it on set.

Gene Simmons of the band 'KISS' currently owns the prop severed head of the kid's mother. It was given to him by Tim Sullivan when he interviewed Simmons for "Fangoria" in 1983.