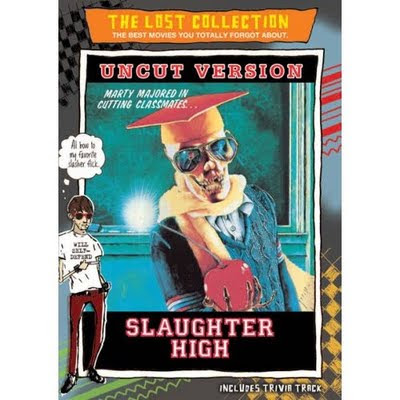 Slaughter High (The Lost Collection) (1985) CLICK FOR MORE INFO OR TO ORDER
Eight different people are invited to a five-year high school reunion at their now closed down high school where a former student, disfigured from a prank gone wrong, awaits to take revenge.
There's Horror in the Halls... Lynching in the Lunchroom... Murder in Metal Shop. I always remember this movie for the scene where the guy chugs a beer filled with acid and it eats through his guts !
A poster of "Pieces" (1982) is visible on the Porno Movie Manager's office wall when he's talking with Carol over the phone.
Star Caroline Munro was actually 36 years old during this film where she played a 'teenage' heroine.
The films working title was "April Fool's Day", however the title was changed to keep this film from being confused with the Paramount film April Fool's Day (1986) which was released the same year.