JUST BEFORE DAWN Another Lost Classic from 1981 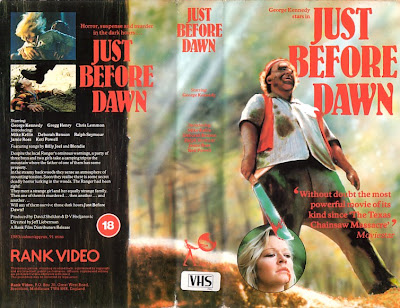 Discovered this one last night on You Tube (its all in one file !) and watched it on my Tivo very good quality for youtube and a great lost classic slasher !
Just Before Dawn (1982) WATCH FOR FREE ON YOU TUBE HERE (GOOD QUALITY)
Five youths set out for a weekend camping excursion, to drink, frolic and skinny-dip on an isolated piece of land one of them has inherited. Despite ominous warnings of local forest Rangers, strange backwoods families and a hollering drunken hunter claiming to have witnessed his friends’ evisceration by the hands of "DEMONS", they trek farther into the foliage. Beautifully shot, extremely eerie, featuring the most demented murderer since Jason Voorhees, and a horrifying twist that will make you wonder...Will any of them survive those dark hours JUST BEFORE DAWN? AVAILABLE ON DVD HERE

Trivia :
The original script included a sixth camper named Eileen, who dies when she is thrown off of a cliff. It also included a climax involving Connie being forced to handle rattlesnakes by the in-bred villains.
The title of the original screenplay was 'The Last Ritual'. The title was changed after the scripts heavy religious theme was axed and the story was rigorously revised.
Director Jeff Lieberman cites Deliverance (1972) as the films primary influence.
Actor Chris Lemmon was performing a truly dangerous stunt when he was shot clinging to ropes after his fall into the rushing river. Lemmon had to psychically hang on to the ropes for a time as the powerful river pulled at him. Only a matter of feet from him was the top of a huge waterfall that was quite infamous for fatal falls.
Director Jeff Lieberman said that countless strangers showed up at the filming location on the day that the scene of Jamie Rose swimming topless was to be filmed. Lieberman said that word of this shoot had apparently gotten out among the local forest rangers.
According to director Jeff Lieberman despite the numerous reviews of Just Before Dawn that have implied it was inspired by The Texas Chainsaw Massacre (1974) or The Hills Have Eyes (1977), he had not seen either film at the time of making Just Before Dawn.
The eerie whistling motif heard in Brad Fiedel's music score is a reference to the rescue whistle that Warren carries in the film.
Despite its authentic, weathered appearance the 'old' church house used in the film was actually built for the production.
According to composer Brad Fiedel many of the ominous sounds in the music score were actually electronically-altered audio clips of himself vocalizing droning noises. 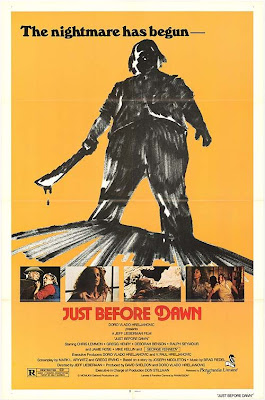